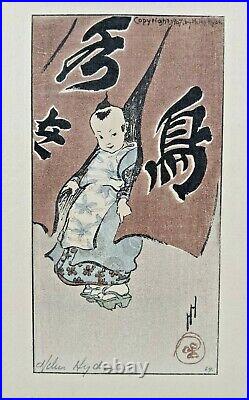 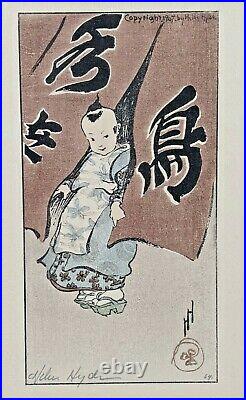 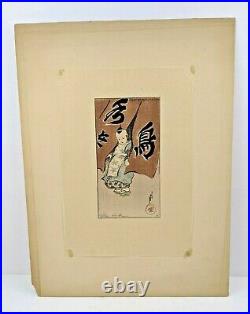 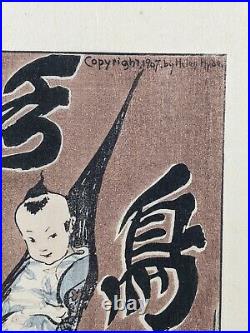 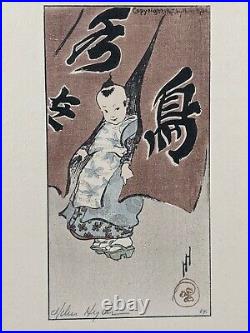 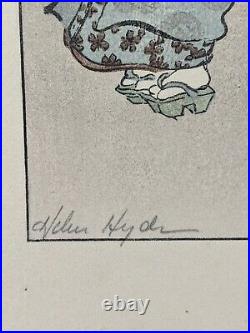 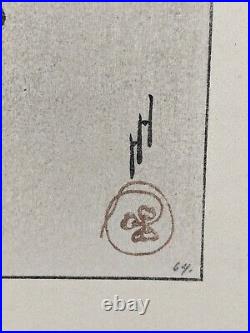 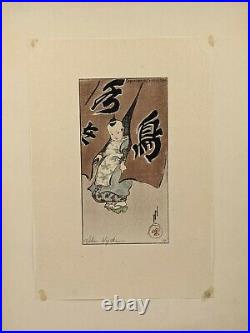 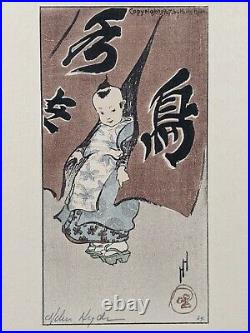 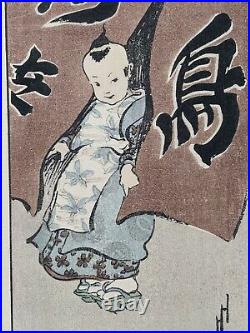 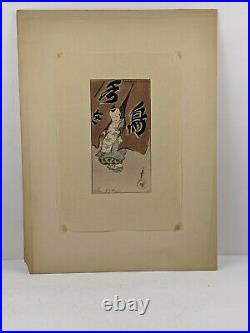 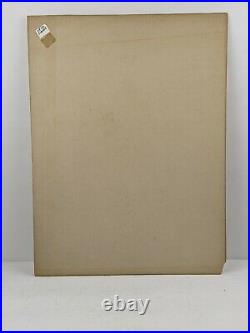 Offered Here is an original signed and dated 1907 Woodblock print by Helen Hyde. The print measures 4″ by 7″ and is on the original rice paper measuring 8″ by 11″ and affixed to the original backing board at the corners. It is signed in pencil in the lower left hand corner and has her signature seal in the right hand corner. The print is copyrighted 1907 by Helen Hyde in the upper right hand corner. This print is titled “The Red Curtain” and features a toddler playing in the curtains. The print is numbered 64 and is in excellent condition. There is a tiny chip on the backing board and the print is not framed. Please view photos to further aid in description and if you have any questions just ask. At twelve she began art instruction under Ferdinand Richardt but it ended abruptly two years later when her father died and her family resettled in San Francisco. Hyde studied briefly at the Art Students League in New York between 1888 and 1889. The following year she departed on a four year sojourn in Europe, which included studying with Franz Skarbina in Berlin, Rafael Collins and Albert Sterner in Paris, and months in Holland and England. In Paris, Hyde met Félix Régamey who introduced her to “loveliness of things Japanese” and this meeting was to have a profound effect on her life and work. Returning to San Francisco, Hyde sought out subjects in Chinatown and produced her first series of color etchings. In 1899, Hyde voyaged to Japan where she became an ardent student of the Japanese language and a student of classical brush painting with an Austrian artist working in Tokyo, and it was from him that she learned the skills of carving wood blocks. She eventually accepted the Japanese system of divided labor and employed Japanese carvers and printers (Shohiro Murate carved her woodcuts for eleven years). Hyde exhibited both nationally and internationally and her work won honors in Japan. Hyde was a member of the Chicago Society of Etchers, the Printmakers Society of California, the Chicago Society of Artists and a life member of the Société de la Grauvre en Couleur. Helen Hyde died on May 13, 1919 in Pasadena, California, where she had undergone another surgery for her cancer. A vast collection of her works are within the confines of the Library of Congress in Washington D. Examples of Hyde’s works can be seen at the Smithsonian American Art Museum in Washington, D. This print can be found in the Smithsonian. The item “Helen Hyde (American 1868-1919) Signed 1907 Japanese Woodblock Color Print Sgnd” is in sale since Wednesday, June 9, 2021. This item is in the category “Art\Art Prints”. The seller is “peace235″ and is located in Columbia, Missouri. This item can be shipped to United States.