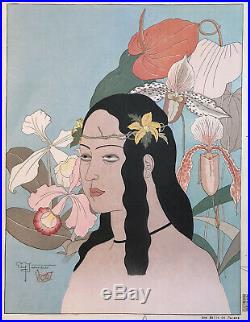 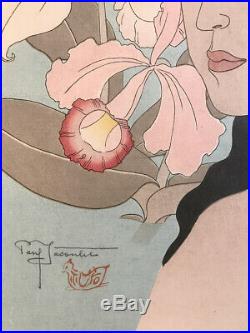 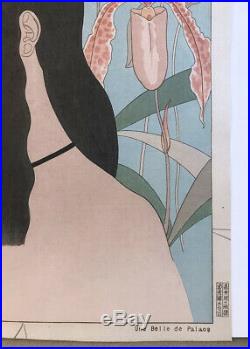 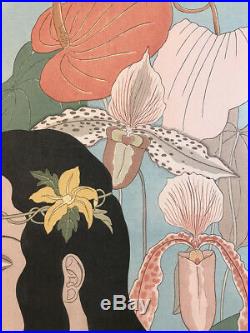 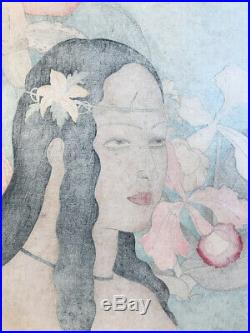 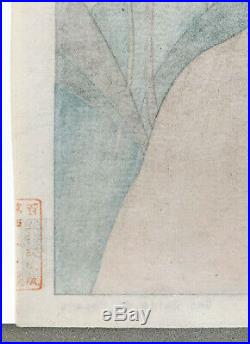 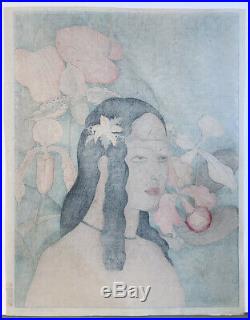 PAUL JACOULET (1896 -1960). Une Belle de Palaos (A Beauty of Palao). Pencil signed with red Mandarin Duck seal. Image size 11 3/4″ wide x 15 1/2″ high. 1935 original Japanese woodblock print, “A Beauty of Palao”, by Paul Jacoulet. While the edition is set at 350, fewer than 275 impressions were made. Size: 18 x 14 ¼ inches. Slight fading from age and display. No tears, foxing or other damage. Problems – Trimmed for framing. Print number (verso) has been trimmed off. Red edge seal (verso) has been trimmed, but is still visible. Front printers seal and title (both on lower right) are intact. Our best guess based on materials and framing techniques is that the print was framed circa 1960. Why the owner and/or framer chose to trim the print without preserving the number and verso red seal is a mystery, and points to ignorance regarding the value of the work. NOTE unlike the other 3 Jacoulet prints we are offering, this one was mounted using Beva film, which was easily removed. Provenance – From a grouping of four works from a Washington DC / San Francisco private collection. Originally framed in a faux bamboo frame under glass. Frame removed for closer examination of the print to determine condition. Backing paper labeled Cohens Picture Shop, 1227 G St NW Washington D. Small label at bottom edge with title. Image depicts a lovely young woman with long, dark hair and sultry eyes. She wears a yellow tropical flower in her hair, and a black choker necklace. She is surrounded by exotic orchids crowned with a red anthurium flower. The South Seas prints were all created from sketches and paintings done between 1929 and 1936. As late as 1959, these early works were being carved to produce new prints. Many were lost because of World War II bombing of Tokyo, making them among the rarest and most desirable of all the artist’s oeuvre. The Republic of Palau (Palauan: Beluu er a Belau) and historically Belau, Palaos or Pelew, is an island country located in the western Pacific Ocean. The country contains approximately 340 islands, and together with parts of the Federated States of Micronesia, forms the western chain of the Caroline Islands. Williams Gallery West, 40982 Hwy 41, Oakhurst CA 93644. The item “Original Paul Jacoulet Japanese Woodblock Print Une Belle de Palaos Orchid Palau” is in sale since Monday, August 17, 2020. This item is in the category “Antiques\Asian Antiques\Japan\Prints”. The seller is “galw001″ and is located in Oakhurst, California. This item can be shipped worldwide.